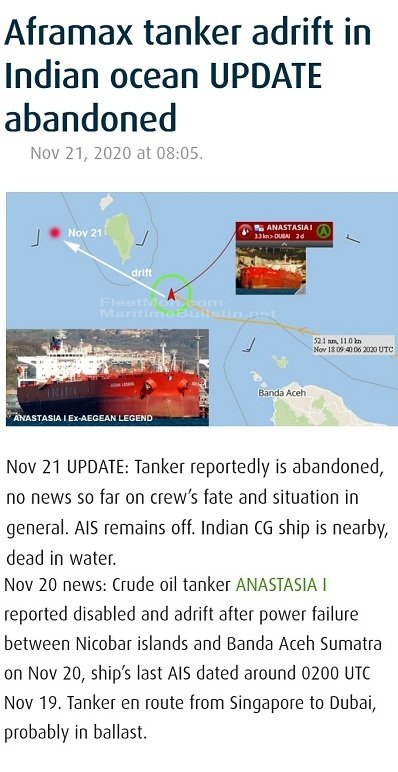 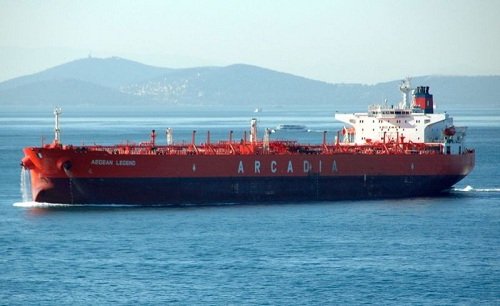 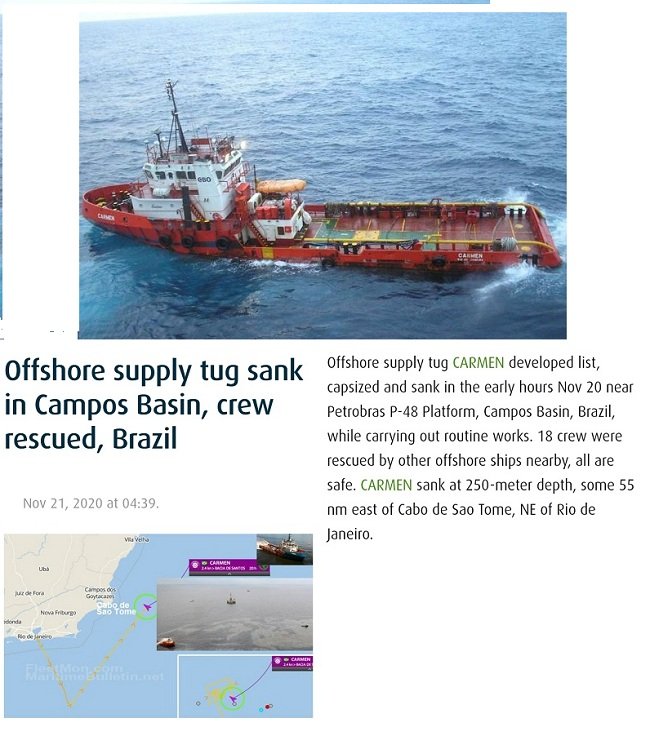 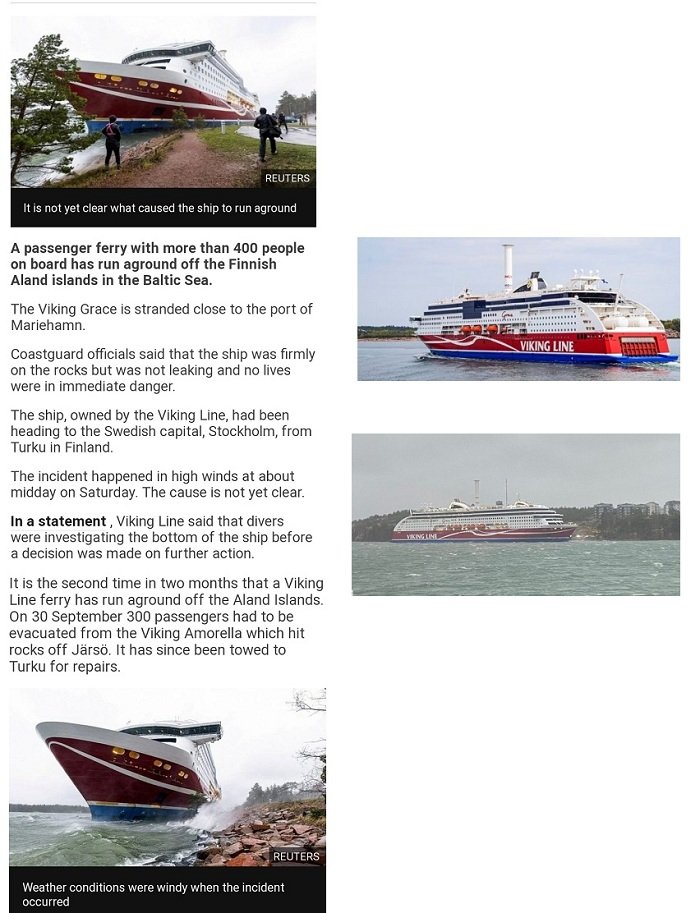 Update: A rescue tug was able to pull the Viking Grace from the rocks early Sunday morning at around 3:40 a.m. The vessel later docked in Mariehamn where passengers were expected to disembark. 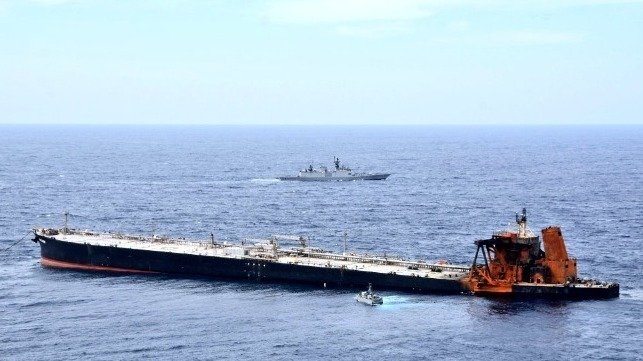 Nearly ten weeks after a fire destroyed the engine room and deckhouse on the MT New Diamond, the crude oil tanker has arrived safely in port. The tanker anchored in Fujairah, UAE after a tow from the coast of Sri Lanka where the fire started.

The long tow across the Indian Ocean back to the port from which she had originally departed was necessitated after officials in Sri Lanka ordered the ship to leave the country’s waters due to fears of an environmental disaster. Combined forces from Sri Lanka and India spent a week fighting the stubborn fire that had begun in the engine room and later spread into the deckhouse and stern areas of the tanker. After the fire was extinguished, a small amount of oil leaked from the damaged tanker that was believed to be from the vessel’s diesel fuel tanks. The approximately two million barrels of crude oil aboard the tanker remained in the undamaged forward section of the vessel.

The tanker, owned by the Porto Emporios Shipping of Greece and operating under charter to the Indian Oil Corporation, departed the UAE in late August transporting the crude to a refinery in India. The tanker was two days out from its destination when the fire began while the vessel was approximately 40 nautical miles off the coast of Sri Lanka. One crew member was killed in the engine room explosion and fire while a second was burnt and airlifted to a hospital in Sri Lanka. The 22 other crew members were evacuated to another tanker that stood by and coast guard vessels from Sri Lanka. The crew, with the exception of the captain, were later repatriated.

After a week of firefighting including vessels from the navy and coast guard along with support from the air force, Sri Lanka announced that it was seeking compensation from the vessel’s owners for its efforts. Sri Lanka presented a bill and reportedly settled with the owners and its insurers at $2.4 million for its services. Sri Lanka required the payment before they permitted the tanker to be towed out of their territorial waters. Indian officials were also considering presenting a bill for their services.

The captain of the New Diamond was detained by Sri Lanka on charges relating to faulty operation of the vessel and contributing to the oil spill. He agreed to plead guilty to charges related to causing an oil spill and violations of the Marine Environment Protection Authority Act. Sri Lanka asked the court to order approximately $1 million in restitution, but the court lowered it to approximately $65,000. The captain was permitted to leave Sri Lanka in October after the fine was paid.

Fears of an environmental disaster caused several changes in the salvage plan for the burnt-out tanker. Plans to tow the vessel to India were later changed and a month ago it was agreed that the hulk would be instead towed back to the UAE.

The final phase of the salvage plan calls for the crude to be pumped aboard a new tanker. That vessel will then transport the oil to its original destination in India.

Experts saying that the 20-year old tanker will then be sold for scrap.
Omhoog 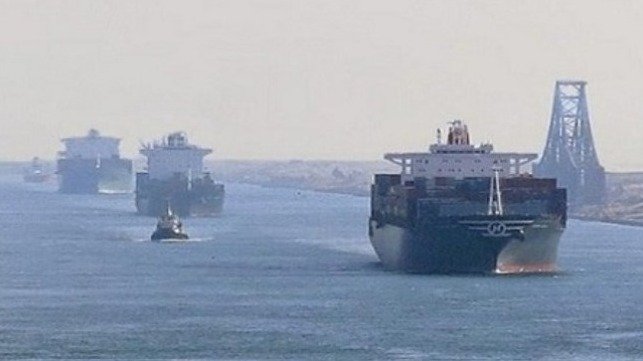 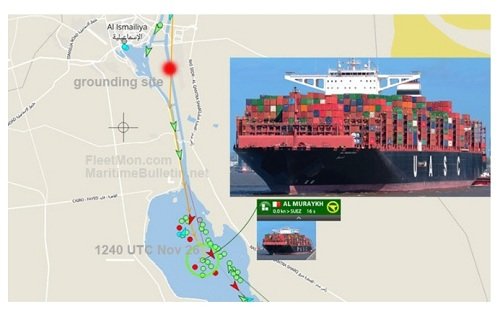 For the second time in two months, a containership has grounded in the Suez Canal interrupting the flow of traffic.

The Suez Canal Authority dispatched assistance to the stranded vessel and after five hours the containership was refloated and moved to an anchorage for inspection, permitting traffic to resume in the Suez. Hapag Lloyd, operator of the 18,800 TEU vessel, reported that it expected the ship to proceed on its voyage uninterrupted.

In October, the CMA CGM Missouri, a 9,448 TEU containership also grounded during a southbound convoy. In that instance, the vessel also reportedly blacked out during the transit causing it to lose steering and ground on the canal bank damaging its rudder. Suez Canal tugboats were able to free the vessel and also move it out of the traffic lane.

In the recent instances, the vessels behind the grounded ship were able to stop without causing further damage. However, in July 2018 three bulkers collided after the containership in front of them grounded. As they were clearing the vessels, one of the bulkers again collided with a northbound containership. Around the same time, a crude oil tanker also briefly grounded. The series of incidents caused numerous delays in the transit.
+
En een ander container schip verloor containers op de Atlantic 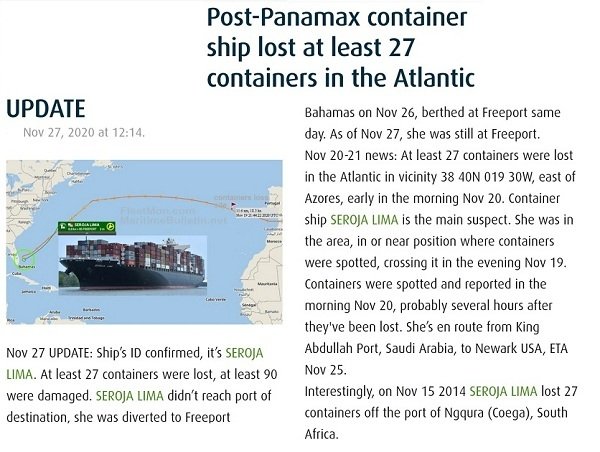 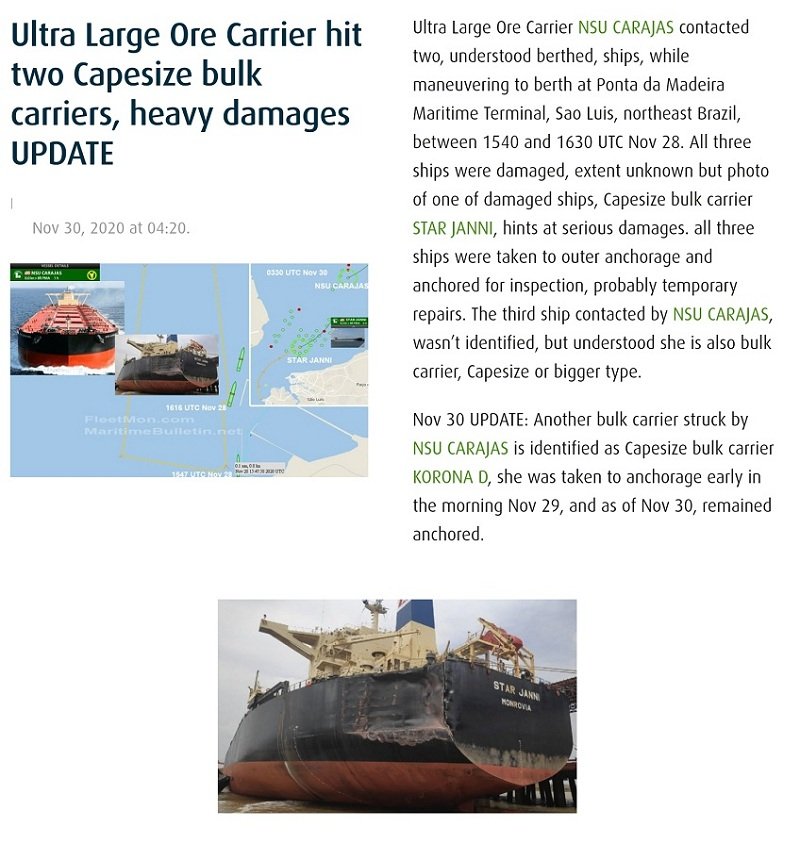 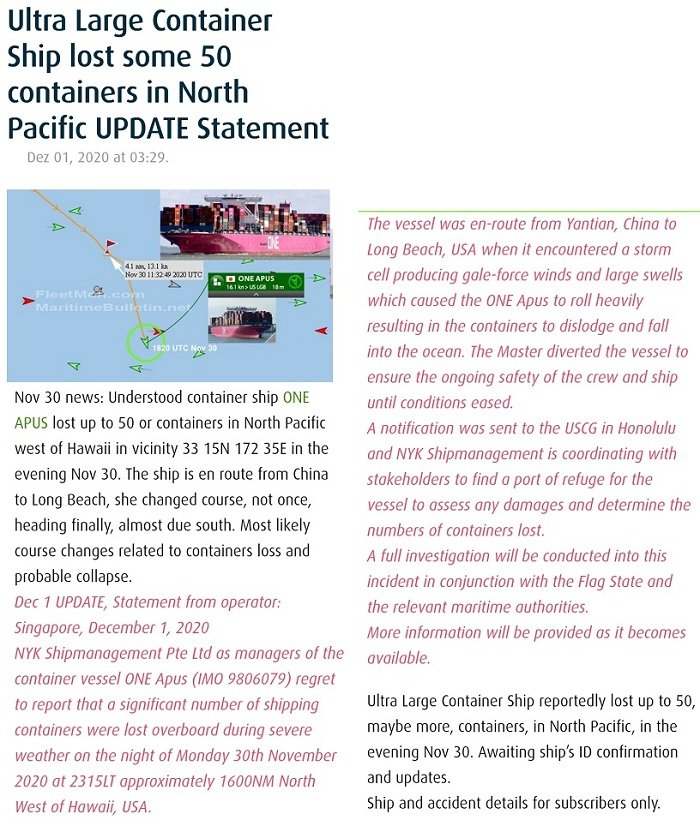