Major milestone’ in removal of sunken ship off Georgia coast 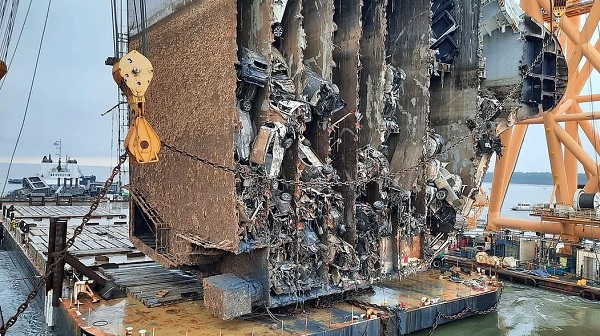 Salvage workers on the Georgia coast are set to begin cutting the second section of the Golden Ray, the massive cargo ship that ran aground just over a year ago in the St. Simons Sound, after crews hit a milestone in removal operations this weekend.
Onlookers watched Saturday as the bow, brimming with smashed cars and trucks and weighing about 6,600 tons, was cut from the body of the ship and lifted just high enough to allow a custom fitted barge to slide underneath.
The section was then moved to a site on the East River where it will be secured for final transit to a recycling facility in Louisiana.
“This is our first major milestone in the removal operation,” said Commander Efren Lopez, U.S. Coast Guard federal on-scene coordinator. “We validated the overall removal method while we continue to refine our strategies to increase the efficiency of the next six cuts.”
But environmental groups in the area have said they remain concerned about the possible impact the removal process may have on the environment given some of the debris and oil that washed up on the shore during the cutting and lifting process.
Omhoog 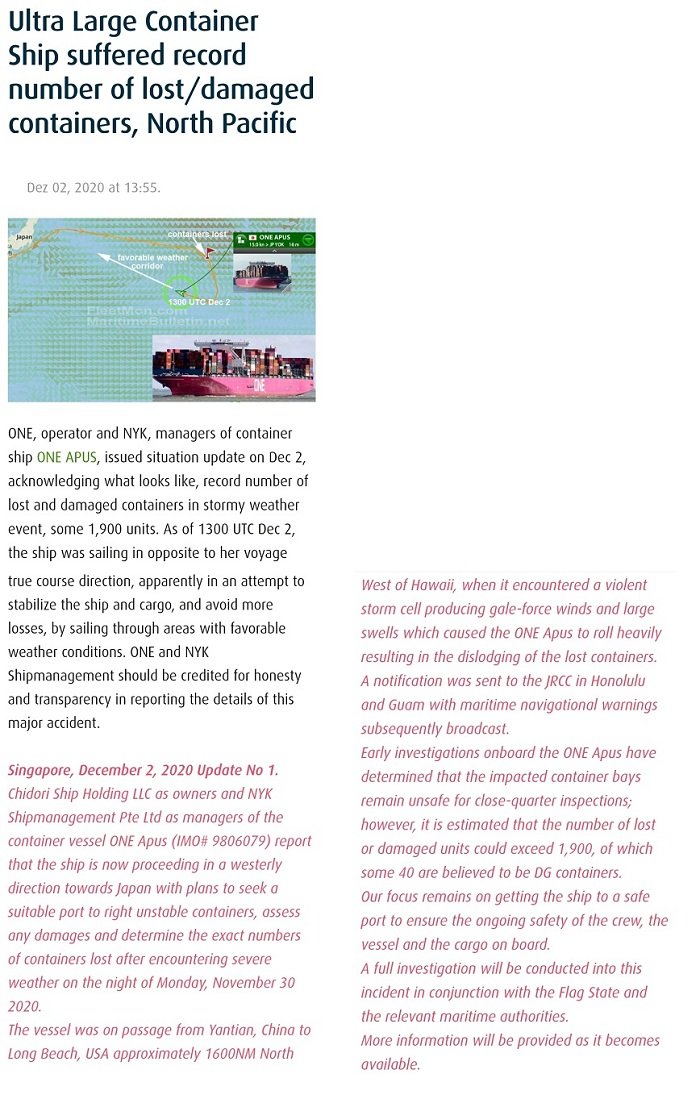 Update over container vessel ONE APUS 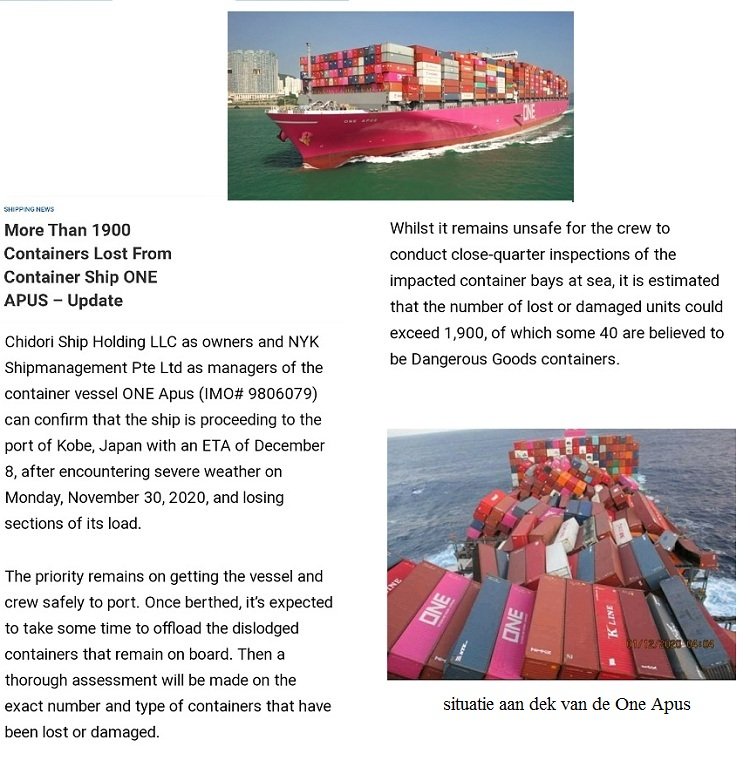 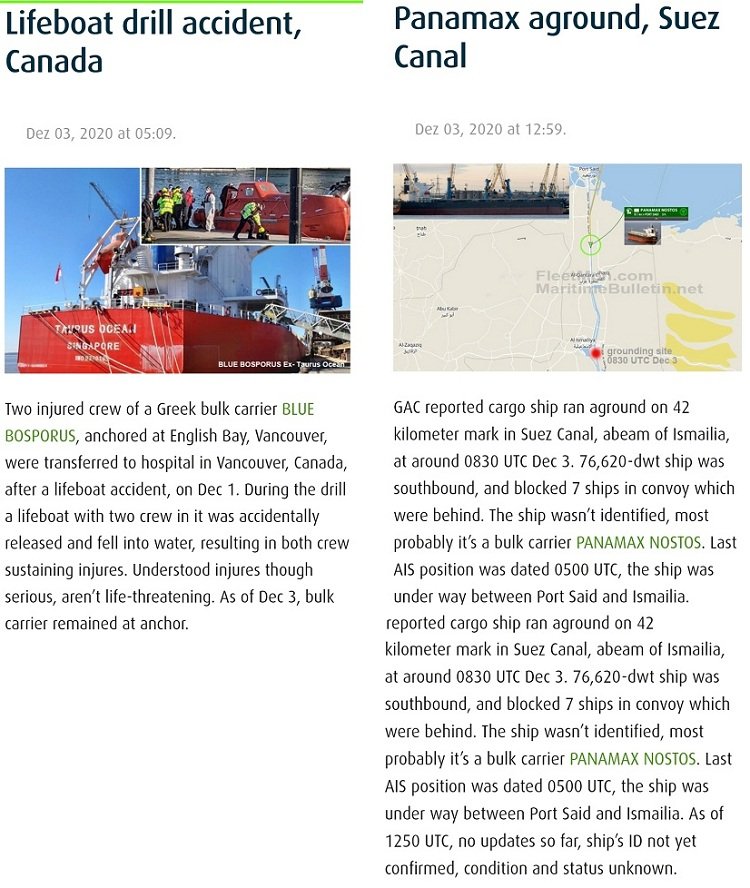 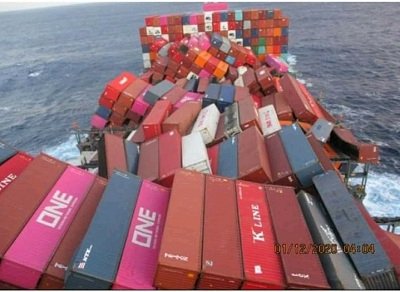 Containers from the ONE Apus appear to have fallen from both the starboard and port sides of the vessel, indicating heavy rolling may have contributed to the severe container losses.
-
Container shipping experts have said that there are similarities to the massive losses suffered by the ONE Apus and the MSC Zoe accident, as container losses from large ships rack up.
Dutch Safety Board member Lianne van der Veen, who described the MSC Zoe accident to Container News readers during the third Cargo Integrity Campaign online Seminar in October, had said that the Dutch investigation into that incident in January 2019 had been caused by the high stability of the vessel causing it to rapidly right itself as it rolled, increasing the forces on the container stack.
According to van der Veen’s seminar presentation, “the length and optimal GM [essentially vessel’s centre of gravity] of ultra-large container vessels (ULCVs) exceed the valid ranges of most international technical regulations and standards for the calculation of accelerations.”
Effectively the greater stability of modern vessels, because they are wider, means that they attempt to right themselves when they roll, with the acceleration of the rolling motion of the ship the forces on the container stack can become irresistible. As was established by van der Leen’s team when investigating the loss of 342 containers from the MSC Zoe.
A container accident consultant, who preferred to remain anonymous, explained to Container News, that in the past most experienced captains could look at the cargo securing manual and the tables in that book that take into account beam and GM to see if the GM is too high, “they can make an educated guess, as many of us can with calculations, to see if they are in the right range”.
However, with the ULCV’s the calculations are too complex and must be completed by an onboard computer, “but those calculations are too complex to make an educated guess,” explained the consultant.
In his appraisal of the ONE Apus accident the consultant said that while he had no idea of the wind direction, wave direction or other pertinent factors he could see from the photographs that containers had fallen from the ONE Apus from both the starboard and port sides, “this would suggest accelerations from a rolling motion.”
Even though this conclusion cannot be considered decisive, the similarities may be hard to ignore. In addition, as the forces on the container stacks increase so the forces on the lashing gear also increase and in many cases exceed the designed load limits, adding to the causes for the loss of containers. 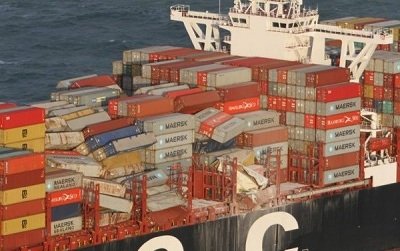 A close up of the MSC Zoe after its 2019 accident in the North Sea, which was caused by acceleration forces on containers as the vessel rolled in heavy seas, with cargo falling from both sides of the vessel.
-
An increase in the load forces container stacks is a direct result of the doubling in size of container ships over the last 15 years, according to the consultant, which has seen vessels become much wider and with container stacks on deck increasing in height. This is thought to play a role in the spate of container losses from vessels over the last few years.
Apart from the MSC Zoe and ONE Apus, a second vessel ONE Aquila, operating in the same service as Apus, lost cargo a month before the Apus. In addition, the smaller, 8,500TEU Seroja Lima, a Maersk vessel operating on the Atlantic lost containers in a storm last month too.
According to the Dutch Safety Board, recommendations to revise the technical and legal regulations for container ships, regarding the design limits of cargo securing equipment and the approved loading and stability conditions were due to be debated at the Maritime Safety Committee (MSC) 102, the International Maritime Organization’s committee on safety, but all agenda items were postponed and will be revisited at MSC 103 in 2021.
Insurance experts considered commenting on the ONE Apus accident to be “premature”, but one manager offered the following view, “Initial reports would certainly indicate a dramatic failure of the deck stow. Thinking back to a range of topics covered in the webinar we ran earlier this year, some initial reports talk of a ‘weather bomb’ (rapidly developing low pressure), which may not have been discernible for weather routing. Regardless of how unexpected the conditions, investigators will no doubt focus on the lashing system used (fully automatic locks or semi-automatic twistlocks) as well as lashing calculations and load plan.”
Nick Savvides
Managing Editor

We’re getting a better idea today of the hazardous cargo lost from the ONE Apus containership.
An update Monday from the ship’s owners and managers confirmed the contents of the 64 Dangerous Goods containers, which were among more the 1,816 containers lost or damaged after the vessel encountered heavy weather on November 30 as it sailed from Asia to the U.S. West Coast.
According to the update, 54 of the Dangerous Goods containers carried fireworks, eight held batteries and two contained liquid ethanol.
To date, there have been no sightings of containers in the water.
The ONE Apus was underway from Yantian, China to Long Beach, California when encountered severe weather approximately 1,600 nautical miles northwest of Hawaii. Heavy rolling caused approximately 1,816 containers to become dislodged.
“We are continuing to liaise with the JRCC in Honolulu, who has advised that there have not been sightings of any containers as yet,” said today’s update from Chidori Ship Holding LLC and NYK Shipmanagement Pte Ltd, as the ship’s owners and managers, respectively.. 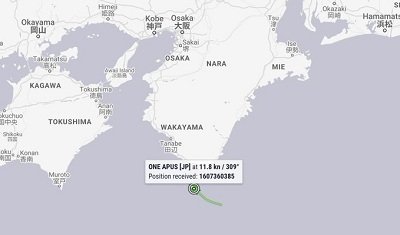 The ONE Apus is currently proceeding to the Port of Kobe, where it expected to arrive on Tuesday.
The vessel is cautiously proceeding to the port of Kobe, Japan with an ETB of 1200LT on December 8, subject to all operations proceeding as planned,” the update added. “The priority remains on getting the ship and crew safely to port. Once berthed, it’s expected to take some time to offload the dislodged containers that remain on board. Then, a thorough assessment will be made on the exact number and type of containers that have been lost or damaged.”
The ONE Apus is a 14,000 TEU containership built in 2019 measuring 364-meters in length and sailing under the Japanese flag. The vessel is operated by Japan’s Ocean Network Express on the Far East Pacific 2 (FP2) Service.
Omhoog 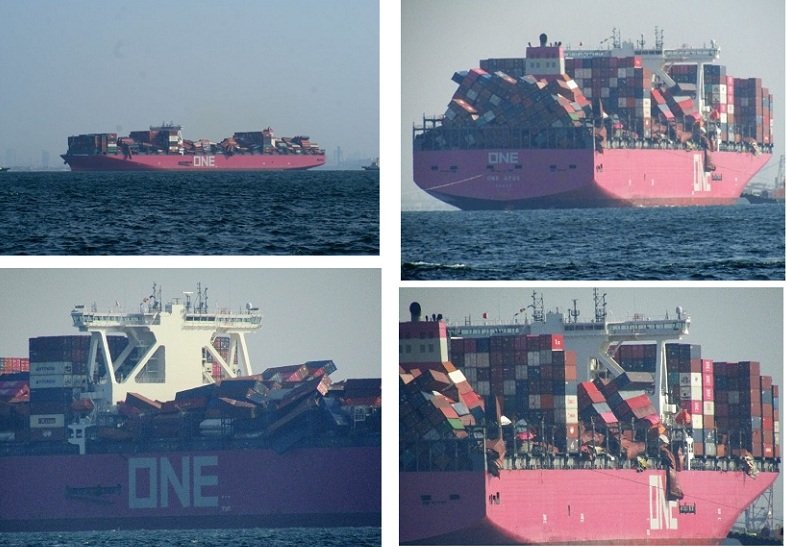 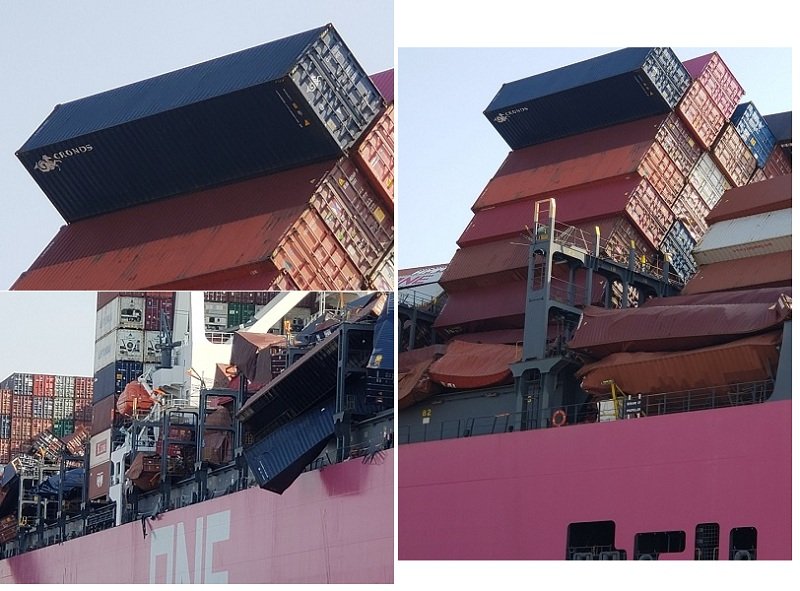 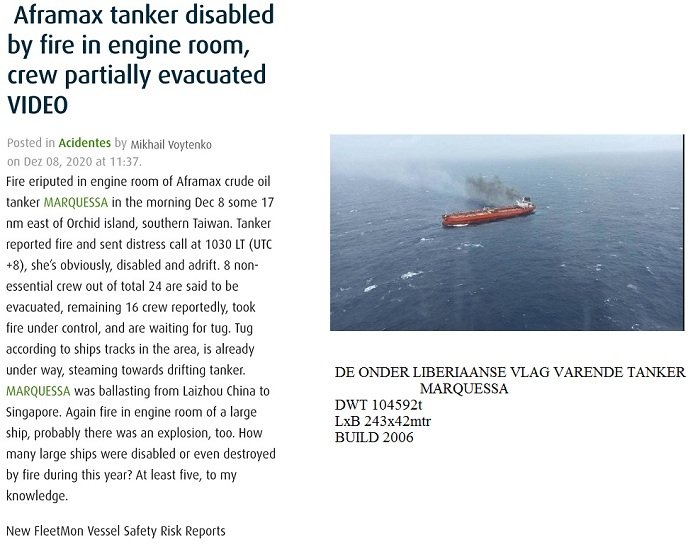