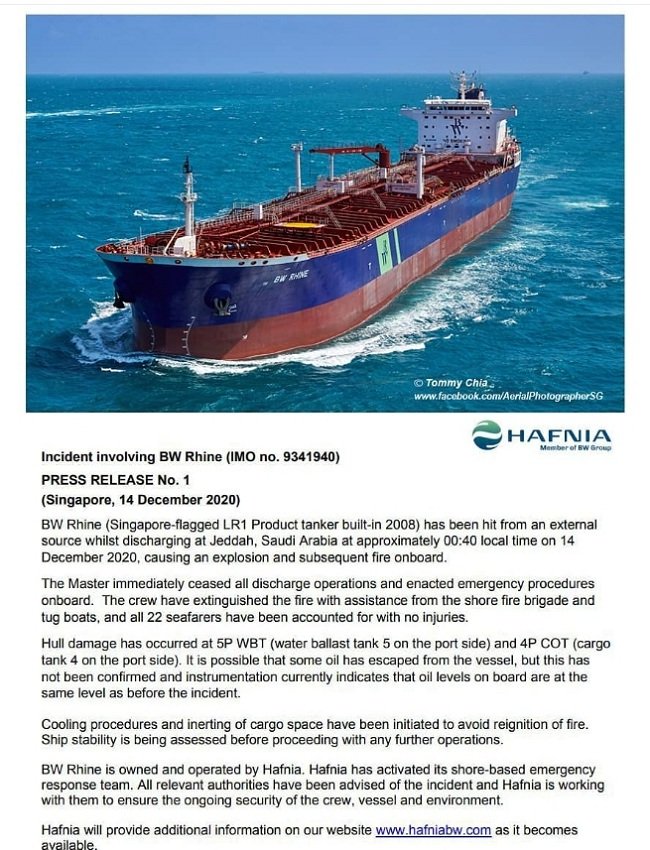 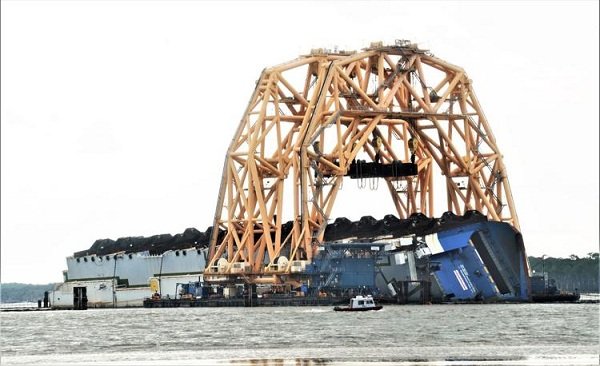 december 15 2020
The towering VB 10,000 crane vessel returned to its perch astride the shipwrecked Golden Ray over the weekend, but there is still much preparation ahead before salvors begin the second cut, officials say.
The upcoming cut will apply the anchor chain’s steel-tearing tension toward separating the stern section from the rest of the ship. The three-week operation to remove the bow in this manner was completed on Nov. 26, reducing the half-submerged steel carcass in the St. Simons Sound to 552 feet long.
Salvors are busy this week resetting the elaborate rigging on the sturdy system of mooring that keeps the VB 10,000 stable during cutting and lifting operations, said Coast Guardsman Michael Himes, spokesman for Unified Command. They also are replacing worn parts on the VB 10,000 from its previous encounter with the steel-reenforced bow section.
Crews also are tweaking and tinkering with the many massive working parts of the complex VB 10,000, applying lessons learned from the ordeal of cutting off the 104-foot-long, 3,100 metric ton bow section, Himes said.
Since that cut, the VB 10,000 had remained a short distance away from the Golden Ray, which has sat half-submerged in the sound since it capsized on its port side Sept. 8, 2019, while heading out to sea with a cargo of 4,200 vehicles.
The twin-hulled crane vessel slid back over the shipwreck Saturday, stirring anticipation of the ensuing second cut.
Frankly, Himes said, it is unlikely that cutting will begin on the stern section before the end of the week, he said.
“We anticipate needing this entire week to continue these operations,” Himes said. “It’s a painstaking process between these two cuts, but it is necessary in order to inspect equipment and perform maintenance and conduct critical repairs. And some of the modifications that are being made are also intended to get us ahead on future cuts.”
The first cut began Nov. 6 and encountered setbacks almost from the start. Included was a broken link in the chain some 24 hours into the cut, as well as a pause of several days in cutting due to the untimely late season arrival of Tropical Storm Eta, which ultimately passed with rough swells but little damage.
Worn, breaking and weakening links continued to be a challenge. Salvors made the decision to change out existing links with links forged from a stronger steel as the work progressed on the first cut. Crews also adjusted the angle of the chains, creating greater tension on the ship’s steel from the pulleys, blocks and winches that shear the anchor chain’s path through the ship from the sea bottom up.
These mooring lines for the stability of the VB 10,000 are secured to a system of four heavy anchors and a trio of pilings sunk deep into the seabed. Two of the mooring lines help guide the twin-hulled VB 10,000 when it moves back and forth across the Golden Ray. The other mooring lines steady the 255-foot-tall arching structure when it is time for cutting and lifting.
“What’s happening right now is they’re moving the mooring lines because the VB 10,000 is repositioning. It has to be secured into the place,” Himes said. “The two main mooring lines go parallel with the VB 10,000 and allow it to move vertically along the Golden Ray. These mooring lines act like guides for it. A number of other mooring lines secure it once it’s in position.”
Workers have drilled a series of holes along the cutting line for the stern section, a move expected to expedite the process, Himes said.
Crews are already drilling holes along the cutting lines for the next section to be cut, Himes said. The St. Simons Sound’s swift tidal currents are such that underwater drilling can only take place for a couple of hours daily during slack tide.
Cleanup patrols continue to monitor the surrounding waters and shorelines for signs of debris or leaking oil from the shipwreck. Shoreline crews continue to collect debris, mostly small plastic pieces, Himes said.
Boat crews are maintaining thousands of feet of oil protective boom around environmentally sensitive areas such as Bird Island, the Frederica River and nearby marshland habitat. Additionally, there is a 1-mile perimeter environmental protection barrier surrounding the shipwreck, with mesh netting underneath to catch loose cars and other large debris and oil protective boom lining its surface.
Omhoog 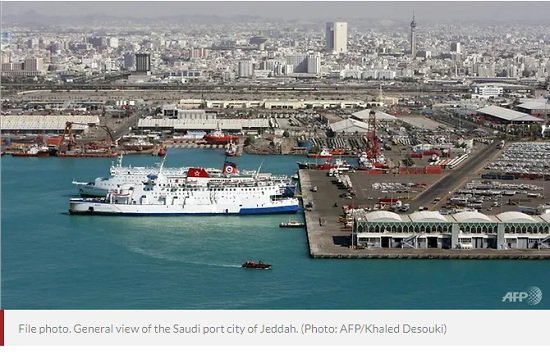 SINGAPORE: All Singapore-registered ships operating in and around Saudi Arabia should be vigilant and take necessary precautions after an oil tanker was hit by an explosion, said the Maritime and Port Authority of Singapore (MPA).
No Singaporeans were on board the tanker and all crew members are safe, added MPA in response to CNA's queries on Wednesday (Dec 16).
On Monday at around 12.40am (5.40am, Singapore time), Singapore-flagged oil tanker BW Rhine was at Jeddah Port when the incident happened.
"The vessel was berthed at the port for discharge operations when the explosion occurred. The ship operator reported that the vessel was hit by an ‘external source’," said MPA.
Citing an official spokesman from Saudi Arabia's Ministry of Energy, the Singapore's Ministry of Foreign Affairs (MFA) said that the vessel was attacked by an "explosive-laden boat".
"Singapore condemns all attacks on commercial vessels which pose a serious threat to the security and safety of international maritime navigation and trade", added MFA in the media statement.
Saudi state media have called the explosion a "terrorist attack", but did not say who was behind the incident.
The fire on the ship was put out by the crew with assistance from the port’s fire brigade and tug boats. The ship reported hull damage to one of its water ballast tanks and cargo tank.
BW Rhine, which is owned and operated by Hafnia, is still assessing the damage to its hull, MPA said. No reports of water pollution were received, it added.
There were 22 crew members onboard.
In response to CNA's queries, Hafnia said the cause of the incident was "not for us as a shipowner to speculate on, but for the relevant authorities to establish".
"Our priorities are (to) care for the crew and their safety, the vessel's stability and the environment," said Hafnia's executive vice president of technical Ralph Juhl.
The company was working on securing the safety of the staff, stabilising the vessel's condition and preventing environmental damage, he said.
"All is calm and under control and we work closely with the charters and authorities to clear the situation."
The BW Rhine is a Singapore-flagged tanker with the capacity to carry 60,000 to 80,000 tonnes of light and middle distillate oil products, according to Hafnia and shipping data on Refinitiv.
The tanker loaded about 60,000 tonnes of gasoline from Yanbu port on Dec 6, the data showed. It is currently 84 per cent full, according to its draft.
++ 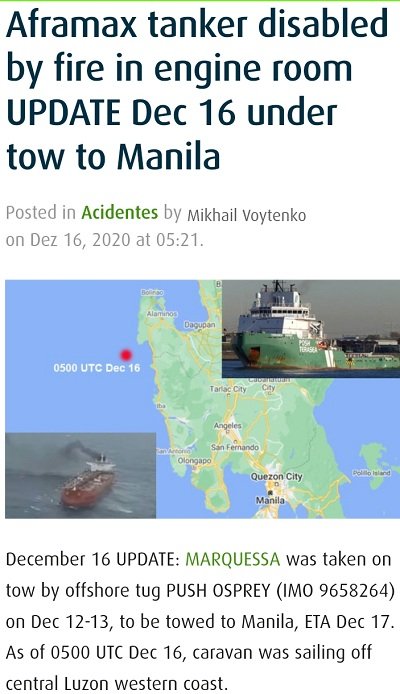 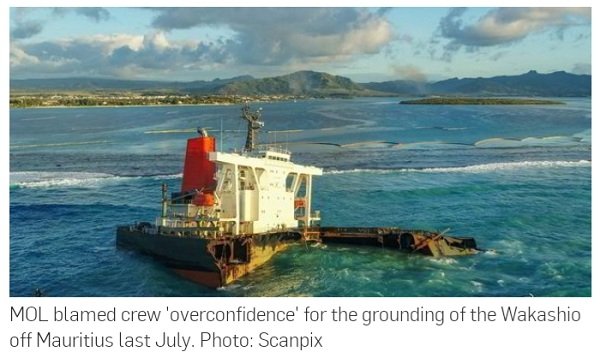 18 december 2020
Mitsui O.S.K. Lines (MOL) has released new details about the July grounding of the bulk carrier Wakashio in Mauritius and has detailed measures it’s taking to prevent the type of incident from happening again in the future.

MOL chartered the vessel from a subsidiary of Nagashiki Shipping Co.

The MV Wakashio was unladen when it strayed from shipping lanes and ran aground on a reef off Mauritius’ coast on July 25. The vessel’s condition deteriotriatd as it as on the reef and eventually resulted in a breach of a bunker fuel tank on August 6, resulting in some 1,000 tonnes of fuel to be leaked into the environment and creating an environmental disaster. The bow of the Wakashio was eventually towed out to sea and scuttled in late August, but operations to remove the ship’s stern are still underway and expected to last into next Spring.

Investigations by the flag state are on-going, but MOL has released today details from its own internal investigation into the accident, clearly pointing to lack of awareness by the ship’s crewmembers.

In today’s reporting on the incident, MOL offered the following background:

“Two days before the grounding of Wakashio (July 23), she changed her passage plan-the distance from the coast when sailing off the island of Mauritius-from 22 nautical miles (Note 1) to 5 nautical miles.

MOL also gave its determination on probable cause, writing:

“Because of not only the above-mentioned background, but also the fact that she had approached to other coasts several times even before the incident, they may have taken unsafe behaviors due to overconfidence that stems from complacency. In MOL’s view, such behavior on a large vessel reflects a lack of safety awareness.

“Another reason behind the cause is that the crewmembers lacked awareness of the guidelines on performing navigation in a safe manner and their efforts to conform were insufficient, because they did not prepare an appropriate passage plan that would have ensured appropriate performance, did not own and use the correct nautical map, and neglected visual and radar watchkeeping.”

To prevent accidents like the Wakashio from happening in the future, MOL has pledged to spend nearly $5 million on measures focussed on addressing the lack of safety and regulatory awareness among crew members on its owned and chartered vessels; improving ship operations including by strengthening shoreside support; and installing new hardware for things like monitoring bridge operations by video and upgrading onboard communication systems. MOL provided details of the measures on its website:

MOL will invest the equivalent of about JPY 500 million in measures to prevent reoccurrence of probable causes, based on the following measures.

1) Addressing the lack of safety awareness
(1) Warning by circular
Make sure personnel on vessels that owned by MOL or its subsidiaries (“MOL Vessels”) and vessels MOL charters (“Chartered Vessels”) know about the causes of the incident and measures to thoroughly enforce measures to prevent any such reoccurrence.
(2) Holding safety campaign (dialogue with crewmembers)
Targeting MOL Vessels, hold online dialogues with crewmembers onboard and on leave to exchange opinions about safety culture.
For Chartered Vessels, enforce thorough prevention of reoccurrence by exchanging opinions about safety culture in a proactive manner.
(3) Conduct a safety awareness survey for crewmembers on navigation watch duties
Conduct a safety awareness survey targeting crewmembers on navigation watch duties on MOL Vessels and Chartered Vessels, to check fact-finding of crewmembers’ operations. Take necessary measures based on the results.
2) Addressing the lack of awareness of regulations on safe navigation and insufficient performance
(1) Provide education related to operation of electronic nautical charts
Targeting crewmembers on navigation watch duties on vessels that MOL Vessels and Chartered Vessels, provide information and education on correct use of electronic nautical charts.
(2) Introduce fail-safe operation of electronic nautical charts
Plan to introduce a service plan for MOL Vessels, which allows browsing of worldwide electronic charts at all scales, without requiring purchase of the chart. Approach shipowners of Chartered Vessels with the same plan.
(3) Ensure thorough awareness and performance in line with guidelines necessary for safe navigation, through circulars and safety campaigns as mentioned above (1)
etc.etc.etc.
Omhoog 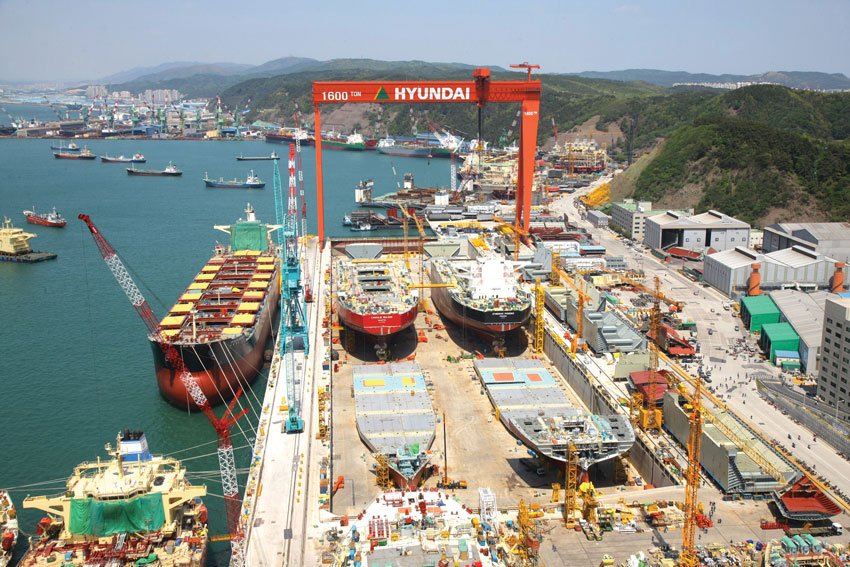 Hyundai Heavy Industries announced on Dec. 16 that it has won orders for six ships worth one trillion won. The six vessels are four 174,000-cubic-meter LNG carriers and two 310,000-ton VLCCs.

Hyundai Heavy Industries Group has won orders for a total of 24 ships worth about 2.99 trillion won since early November. Its cumulative order receipts hit 100 ships worth US$7.85 billion, which corresponds to 71 percent of the shipbuilder’s order intake target for 2020.

Shipbuilding industry experts forecast that the three shipbuilders will continue to win orders in the first half of 2021. This is because global shipowners are expected to place large orders amid a boom in container transportation. Hyundai Heavy Industries and Samsung Heavy Industries recently signed LOIs for 13,000 TEU container ships with Capital Product Partners, a Greek shipping company, according to foreign media outlets. Capital Product Partners placed an order for 10 vessels including five optional ones with each of the two shipbuilders. A 13,000 TEU container ship is worth about 100 billion won. The two shipbuilders will each win a one-trillion-won contract. 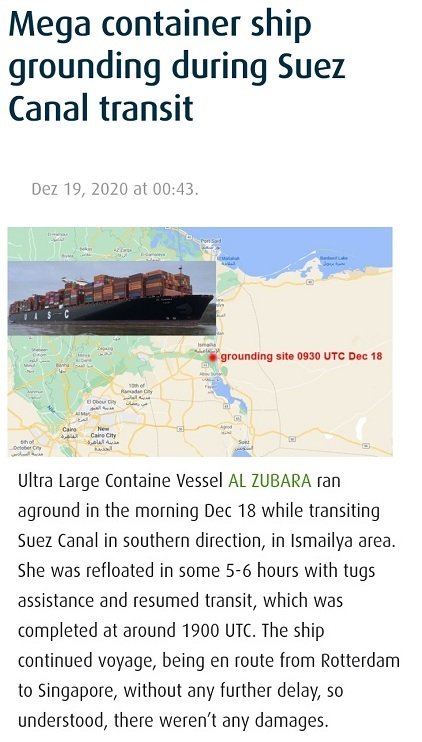 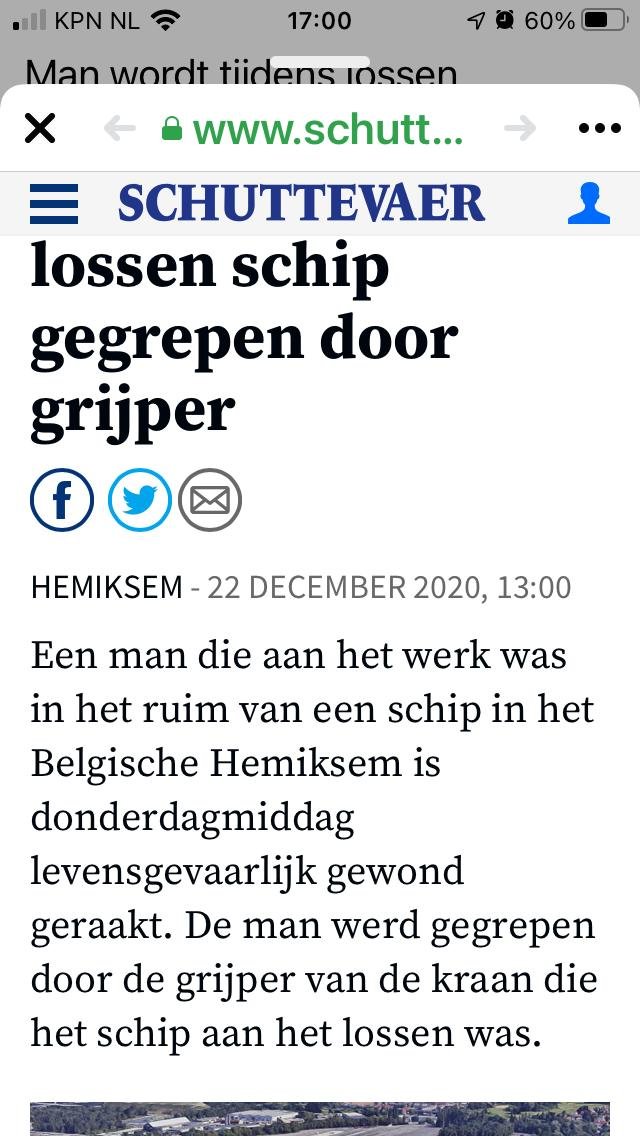 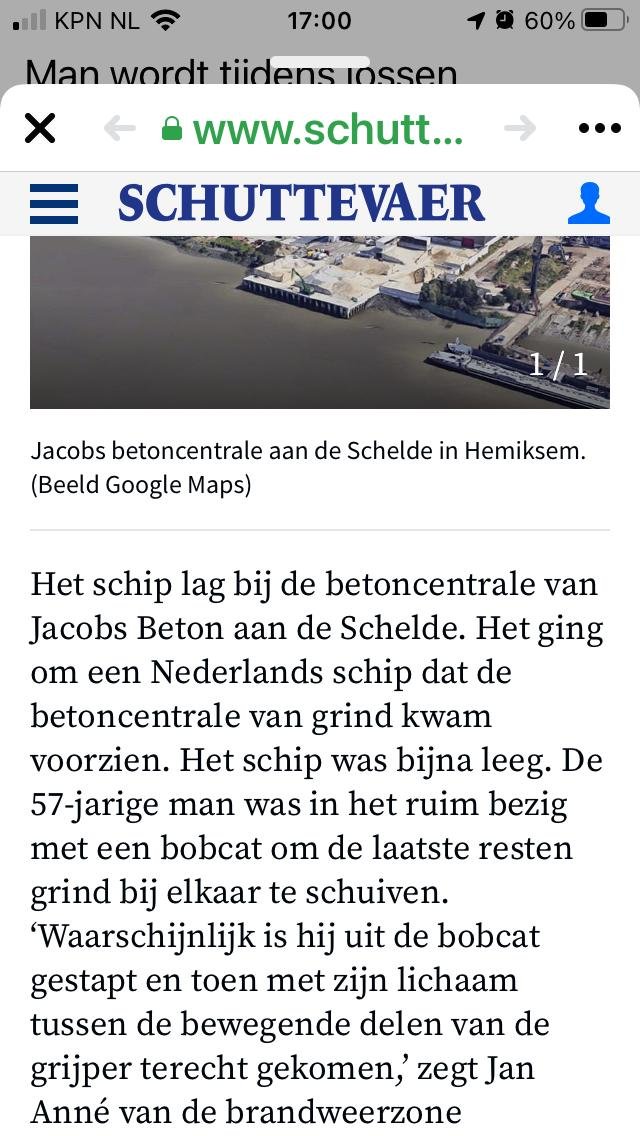 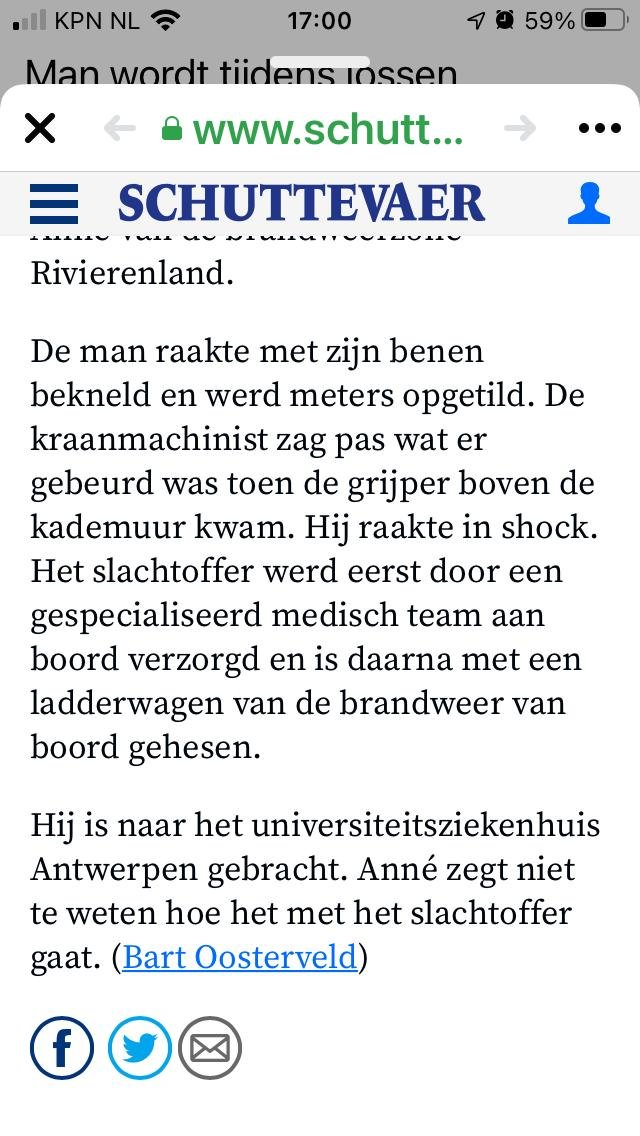