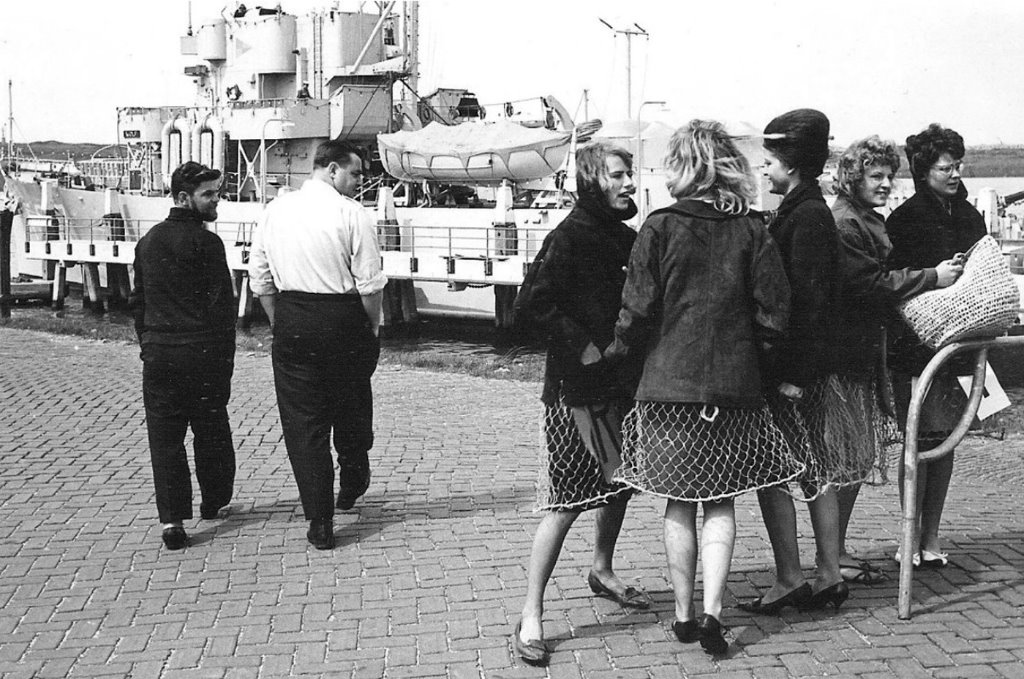 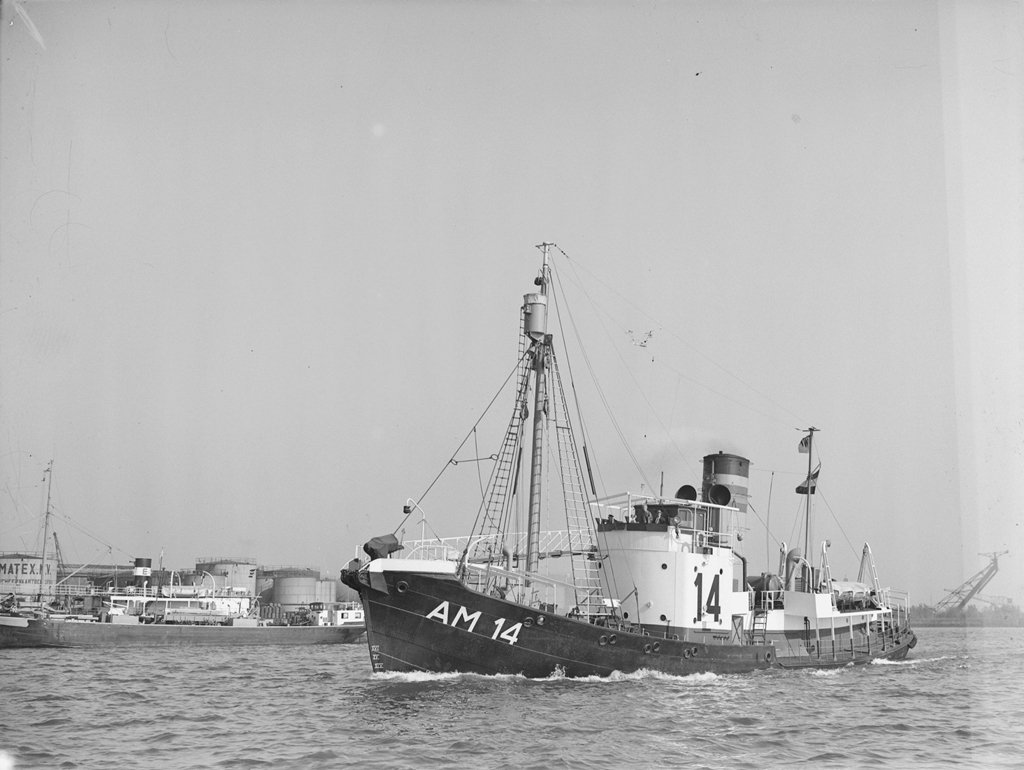 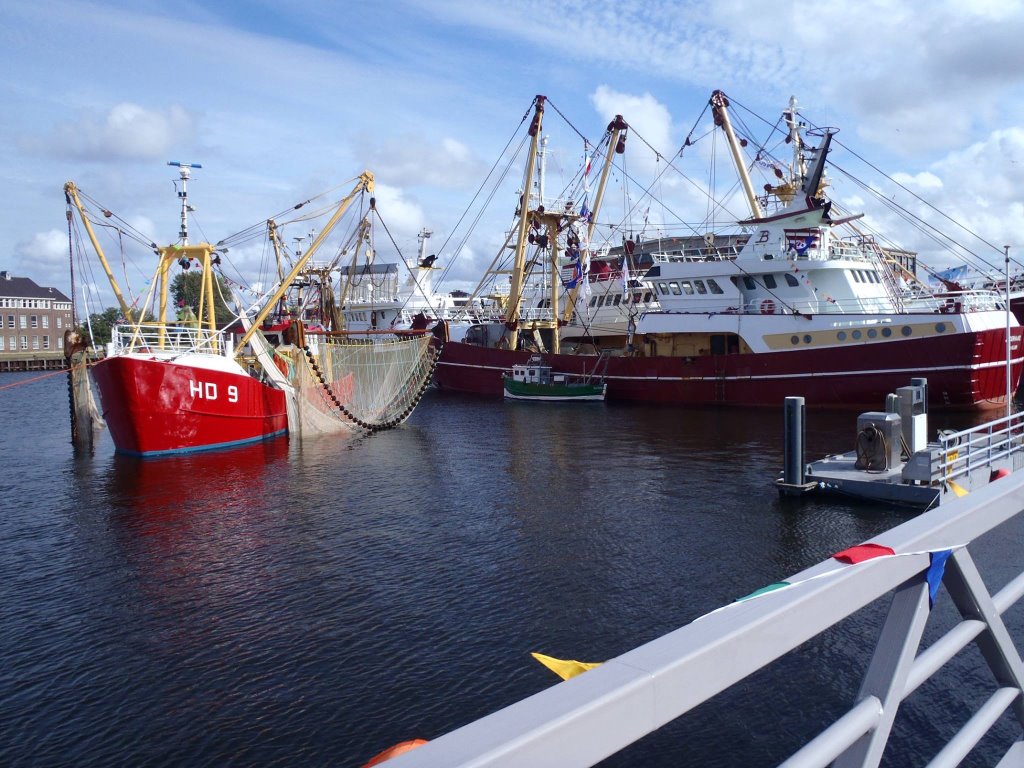 Uit de Daily Mail - overbevissing door Chinese vissersvloot bij de Galapagos eilanden.
Daar waar o.a. dat expeditie cruise schip SILVER ORIGN naar onderweg is.
Maar de Chinezen zijn haar voor met hun visvangst.
Helaas in het Engels, maar interessant om te lezen.
+
QUITO, Ecuador (AP) - Some call it a floating city, a flotilla of 260 mostly Chinese fishing vessels near the Galapagos archipelago that is stirring diplomatic tension and raising worries about the threat to sharks, manta rays and other vulnerable species in waters around the UNESCO world heritage site.
Yet the vast fleet is in international waters, outside a maritime border around the Galapagos and also outside coastal waters off Ecuador, which controls the archipelago. That means the fleet, one of the biggest seen in years off South America's Pacific coast, is likely to fish with minimal monitoring until its holds are full.
The Chinese fleet is "very close" to the edge of the exclusive economic zone around the Galapagos, which extends 200 nautical miles (370 kilometers) from the archipelago, said its governor, Norman Wray. He said that, because of overfishing in recent years, "what we're seeing is that each time fewer species return to the Galapagos."
Luis Villanueva, an officer with the Pew Bertarelli Ocean Legacy Project, said Thursday that it was possible, though unproven, that long fishing lines from the Chinese vessels could be drifting into the exclusive economic zone. The fleet is a huge logistical undertaking, with storage and supply vessels that allow it to stay at sea for long periods.
The fleet has drawn the attention of the United States, whose relationship with China is fraught on many fronts. The U.S. National Security Council tweeted that the U.S. stands with Ecuador "against any aggression directed toward their economic and environmental sovereignty."
China maintains that it is a "responsible fishing nation" with a "zero tolerance" policy toward illegal fishing. The Chinese Embassy in Quito said in a July 23 statement that China respects Ecuador's measures to protect the environment and preserve marine resources.

China had ascertained and confirmed with Ecuador's navy that all the Chinese fishing vessels are operating legally "and don't represent any threat for anyone," the embassy said.
Despite the Chinese statement, Ecuador has expressed concern through diplomatic channels and its navy is on alert for any incursion into Ecuadorian waters. In 2017, 20 crew members of a Chinese boat were jailed after Ecuador seized the vessel in the marine reserve of the Galapagos and discovered large numbers of sharks on board.
Ecuador´s foreign minister, Luis Gallegos, said the fishing fleet includes Liberian- and Panamanian-flagged boats, and that Ecuador seeks deeper coordination with Colombia, Panama, Peru and Chile on protecting the eastern tropical Pacific.
China's "distant-water" fishing fleet is the biggest in the world and comprises a total of about 17,000 vessels, with about 1,000 of those registered in other countries, according to a June report by ODI, a London-based research group.
The fleet's "vessel ownership is highly fragmented among many small companies" and it is unclear whether the Chinese government has a clear picture of its complex control structure, the report said. It said other countries are involved in the world's overfishing crisis but that China is the most significant factor.
The U.N. Food and Agriculture Organization said in June that about one-third of fish stocks are being fished at "biologically unsustainable levels."
Luis Suárez, vice president and executive director of Conservation International in Ecuador, said there are suspicions, so far unconfirmed, that the Chinese fleet is being aided by South American associates because it is so far from home. For example, they could be selling it fuel, he said.
Villanueva said fishing pressure around the Galapagos will only increase as climate change warms oceans and creates a more abundant catch around the archipelago in comparison to other regions.
"More and more fleets will be interested in that area," he said. 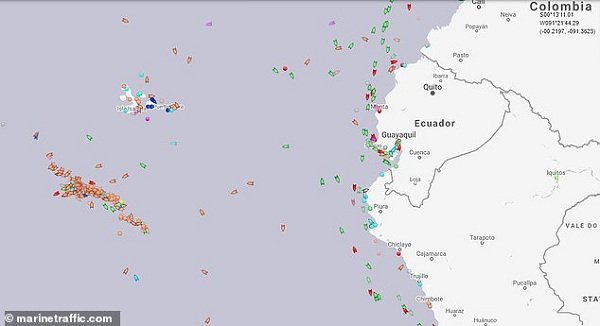 China's 300-mile fishing fleet which is visible from SPACE and hoovers up all sea life is decimating endangered species - and plastic waste thrown overboard is polluting the shores of Darwin's Galapagos Islands, scientists warn 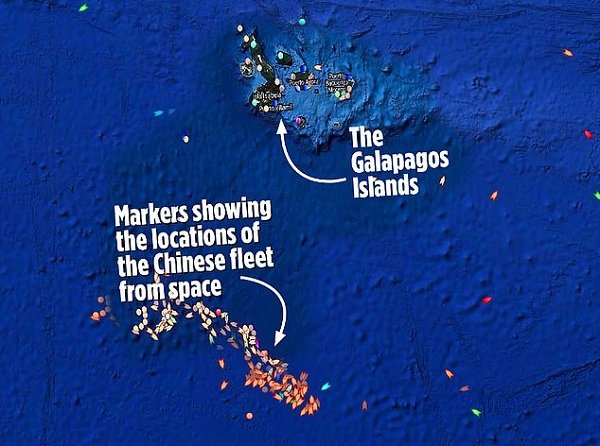 Stretching for miles across the horizon, a vast armada of Chinese fishing boats trawl the pristine waters close to the Galapagos Islands.
Ostensibly fishing squid, the real target for the 265-strong fleet are sharks to serve the appetite for expensive fin soup, costing up to £350 a bowl, sold in markets across China and Hong Kong.
Night and day, the vessels – many the size of a football pitch – ransack the seabed, scooping up not only whale and hammerhead sharks but other species including turtles and birds. 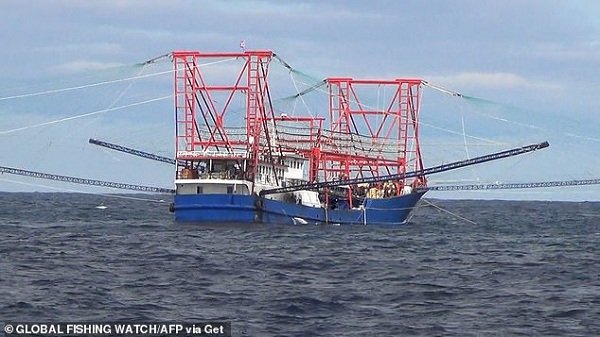 Stretching for miles across the horizon, a vast armada of Chinese fishing boats trawl the pristine waters close to the Galapagos Islands
The scale is staggering. When a single vessel was intercepted straying into the protected waters around the Galapagos three years ago, 300 tons of refrigerated scalloped hammerhead shark fins were found
Since then, the cluster of islands where Charles Darwin first developed his theory of evolution by natural selection, have become the epicentre of the multi-billion-pound industry.
The fleet may be far out to sea, but the impact is increasingly visible on the beaches, where plastic bottles bearing Chinese writing and discarded by fishermen come ashore by the hundred every day.
Islanders accuse the government of Ecuador – the nation that the Galapagos belong to – of failing to do enough to tackle the problem.
A few half-hearted complaints have been shrugged off by Beijing, but as the fleet operates in international waters just outside the Galapagos Exclusive Economic Zone where there are no laws regulating fishing, Ecuador’s options are limited.
However, critics suspect another consideration – the £4.5 billion of infrastructure loans that China has poured into Ecuador as part its Belt and Road Initiative to massively increase Beijing’s power and influence around the world.

China insists that it not only respects Ecuador’s measures to protect the environment and preserve marine resources, but is a ‘responsible fishing nation’ with a ‘zero tolerance’ policy toward illegal fishing. The Ecuadorian government appears willing to accept such assurances
foto
The fleet may be far out to sea, but the impact is increasingly visible on the beaches, where plastic bottles bearing Chinese writing and discarded by fishermen come ashore by the hundred every day
‘The Ecuadorian government is seeking to pay off its debt with China by giving it the Galapagos,’ claims an online petition that has garnered thousands of signatures. ‘We firmly believe that this should NOT be in negotiation. The wonders of the Galapagos ARE OURS.’
The campaign to protect marine life may have found its figurehead – Hope. A whale shark given a GPS tracker and that name by conservationists last year recently vanished. It was last traced to an area where the fishing fleet was operating.
On the islands, British biologist Esme Plunkett, 23, says: ‘I have never known such anger. Locals are devastated to see what these fishing fleets are doing.
‘It’s devastating to see this level of destruction. These people are emptying our oceans of life and filling our beaches with plastic.’
‘They come to this part of the world every year because it is teeming with life, but their actions are threatening to destroy that life for ever. We are facing the separate threat of vast quantities of plastic and even oil drums washing up on our beaches.’
Experts believe that the estimated 25,000 bottles thrown overboard by Chinese fishermen every day.
Omhoog