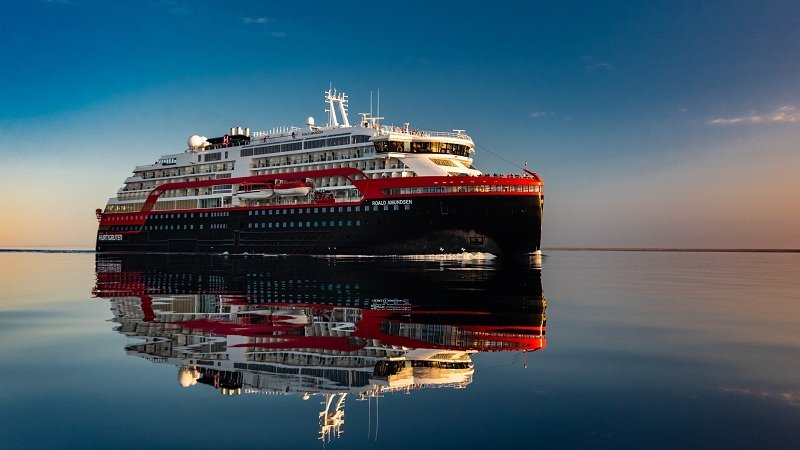 One of the first cruise ships in the world to resume sailing since the coronavirus-caused worldwide halt to cruising in March is experiencing a significant outbreak of the illness that already has sent several people to the hospital.
Norwegian expedition cruise company Hurtigruten late Friday said four sick crew members from the 535-passenger Roald Amundsen were admitted to the University Hospital of North Norway in Tromsø, Norway, earlier in the day after the vessel docked in the city. All four had tested positive for COVID-19.
On Saturday, the line said another 32 crew members had tested positive for the illness.
The Roald Amundsen on Friday had just finished a seven-night sailing out of Tromsø to the Arctic’s wildlife-filled Svalbard archipelago.
All four of the hospitalized crew members had been sick for several days while on board the vessel, and all four had been placed in isolation. But the line said their symptoms weren’t consistent with COVID-19. They only tested positive for the illness after the ship docked in Tromsø early Friday.
It’s unclear if the crew members are seriously ill, or if they only are being hospitalized as a way to keep them isolated.
The entire ship has now been placed in isolation, and the 154 remaining crew members on board have all been tested for COVID-19. Hurtigruten on Saturday said 122 of the crew members had tested negative for the illness.
Hurtigruten on Saturday said it had contacted all 178 passengers who left the ship early Friday, and they had been ordered to self-quarantine in line with Norwegian health regulations.
The company also has contacted another 209 passengers who were aboard the previous sailing of the Roald Amundsen, and they have been told to self-quarantine, too.
The next voyage of the vessel, which had been scheduled to begin Friday, has been canceled.
Hurtigruten has been at the forefront of efforts to restart cruising in Europe in the wake of falling coronavirus case counts across the continent. The line started cruises to Norway out of Hamburg, Germany, in June with a single ship, the 530-passenger Fridtjof Nansen. It added cruises to Svalbard on the Roald Amundsen and the 335-passenger Spitsbergen in July.
The trips only have been open to local travelers from select European countries. No Americans have been on board the vessels.
“We are now focusing all available efforts in taking care of our guests and colleagues,” Hurtigruten spokesperson Rune Thomas Ege said in a statement posted Saturday at the line’s website. “We work closely with the Norwegian national and local health authorities for follow-up, information, further testing, and infection tracking.”
Hurtigruten had implemented a wide range of new health and safety measures on Roald Amundsen and the other ships it brought back into operation, including enhanced cleaning, added medical screenings for passengers and crew, and an end to buffets. All the vessels were operating at a sharply reduced capacity, below 50% of normal, to ensure social distancing.
The measures were similar to what many lines have been touting as the solution to keeping coronavirus off ships as cruising resumes.
The Roald Amundsen trips included Zodiac landings for wildlife sightseeing in the Svalbard archipelago as well as kayaking and other expedition-related activities.
Omhoog