Owners are rapidly laying up containerships as the market slows. The size of the idle fleet will get bigger while rates and profits slide,
says Drewry Shipping Consultants Limited.

The number of idle container vessels has gained momentum in November and has jumped 52 percent from October,
Drewry said in its Container Insight Weekly. Idled ships are defined by Drewry as those which have been inactive for at least 14 days.
The crisis weighs heavily on the global container freight market, which continues to be dominated by massive overcapacity, low demand and historically low freight rates.

The world’s idle containership fleet swelled to 238 vessels and topped 900,000 TEU in November as owners rapidly lay up containerships as the market slows.

The size of the idle container ship fleet swelled by 52 percent from October to November to reach 900,000 TEUs, the largest monthly sum since early 2010
following the market crash of 2009.

By mid-November, there were 31 idle ships with a capacity of 8,000 twenty-four-equivalent units or above, including the 18,000 TEU Triple-E vessel,
Morten Maersk.

Alphaliner recently announced that the number of unemployed container vessels has already exceeded the magic threshold of one million teu,
the highest level in five years.

The idle fleet peaked in 2009 when as much as 1.4 million TEU worth of ship capacity, then representing 11 per cent of the world fleet, was laid up.
However, while the present situation does share similarities with 2009 there are more fundamental differences.
Source: lloyd.com 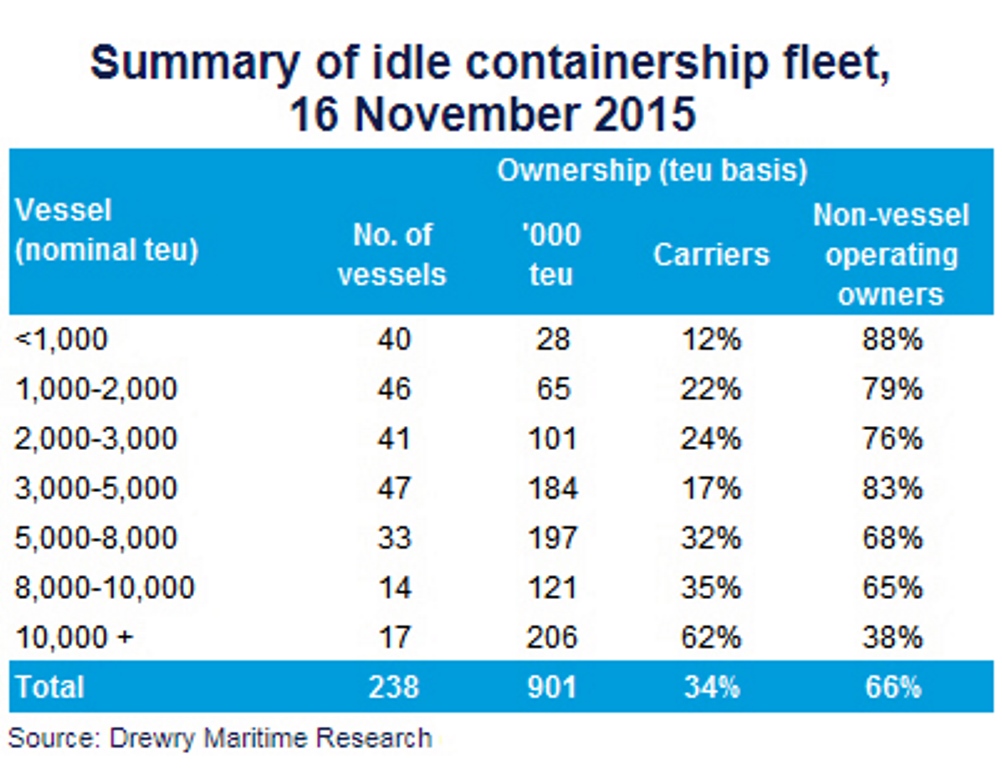 For clarification, Drewry classifies a ship as idle when it has been stationary for a minimum of 14 days.
So-called missed voyages do not count as these vessels continue to sail without calling at ports so that they can be easily fitted back into the schedule. 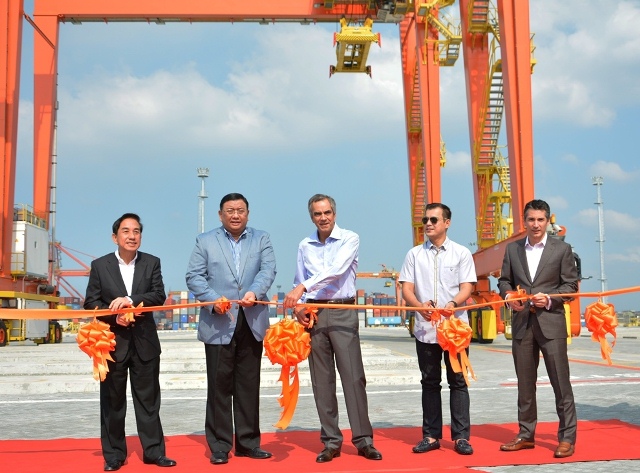 mage: ICTSI
Part of MICT’s PhP 5 billion expansion project, Yard 7 adds substantial capacity to the terminal now at 2.75 million TEUs from 2.5 million TEUs.
This not only addresses the current demand of shipping line clients and the port community for terminal services but also of anticipated growth.
About MICT:
In 1988, International Container Terminal Services, Inc. (ICTSI) won the 25 + 25 years concession to operate the Manila International Container Terminal
(MICT) in an international tender. Since ICTSI’s takeover, MICT has increased its annual capacity five-fold, expanded its container handling fleet to
make it the largest and most modern container terminal in the Philippines, and switched from a manual control system to an integrated real-time
IT terminal control system. MICT is ICTSI’s flagship operation.

CMA CGM gets financing for NOL acquisition
France’s CMA CGM is in talks with banks including BNP Paribas Group, HSBC Holdings PLC. and J.P. Morgan & Chase Co. to raise money to finance the acquisition of Singapore shipping company Neptune Orient Lines Ltd. in a deal valued at around $5 billion, people with knowledge of the deal said Thursday.

CMA CGM, the world’s third-largest container shipper by capacity had late last month entered into exclusive talks with NOL’s largest shareholder, Temasek Holdings Pte. Ltd., to buy its stake in the Singapore-listed firm. If CMA CGM succeeds in acquiring the stake, it will eventually lead to an offer for all of NOL.

“CMA CGM must show it has the financial muscle to go through with the deal so it is talking to the banks,” one of those people said, also that the terms of the deal are still be being worked out. 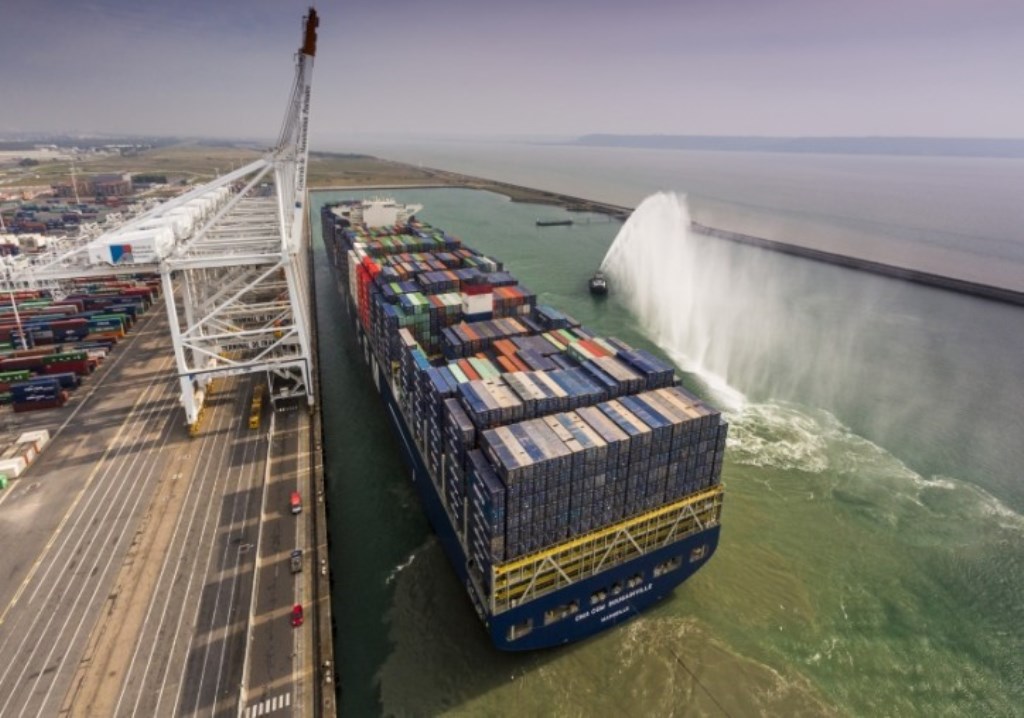 Image: CMA CGM
The offer could include $3 billion in NOL’s debt. NOL has a market capitalization of close to $2 billion. A deal would allow Temasek to exit from a company that has been incurring losses for many years.

If the acquisition goes through, it would be one of the biggest tie-ups between container-shipping lines in recent years and would mark a rare consolidation in a fragmented industry. The exclusivity period ends Monday.

Earlier in November, NOL had disclosed it was in separate talks with both A.P. Moller-Maersk A/S, the world’s largest container line by volume, and CMA CGM. In a statement on Nov. 21, NOL said that it and its shareholder have entered into exclusivity with CMA CGM that will allow the French shipper to conduct due diligence and negotiate definitive terms of a potential agreement.

NOL, which handles about 3% of global container volumes, said there is no assurance that the talks would lead to a definitive offer.
Sluggish global trade and overcapacity have hammered even the biggest shipping lines, forcing many into strategic alliances and rounds of cost-cutting. Many blame the industry’s fragmented nature for its current struggles. With few companies controlling more than 5% of the market, reducing the glut of ships is taking longer than many industry observers had anticipated.

Even so, consolidation has been rare. Several potential takeover targets, such as NOL, are controlled by deep-pocketed sovereign-wealth funds, which can afford to ride out the industry’s boom-and-bust cycle. Others are private or family-controlled outfits, which often take similar long-term views.

NOL’s Asia-to-Americas routes would fill a weak spot for CMA CGM, whose executives have said they are looking to expand into new territories.

NOL has been looking for a buyer for months. The company reported a $96 million loss in the third quarter and sold its profitable logistics business, APL Logistics Ltd., for $1.2 billion to Kintetsu World Express Inc in May.

CMA CGM’s Sea Giant Arrives in LA
The Port of Los Angeles welcomed the largest container ship ever to call at a North American port at dawn on Saturday, December 26.

Launched by the French shipping line CMA CGM on December 10, the CMA CGM Benjamin Franklin is 1,300 feet long, 177 feet wide
and has the capacity of nearly 18,000 containers, including 1,500 Reefer containers.
All containers placed in a line would equal the distance between Santa Monica and Santa Barbara. 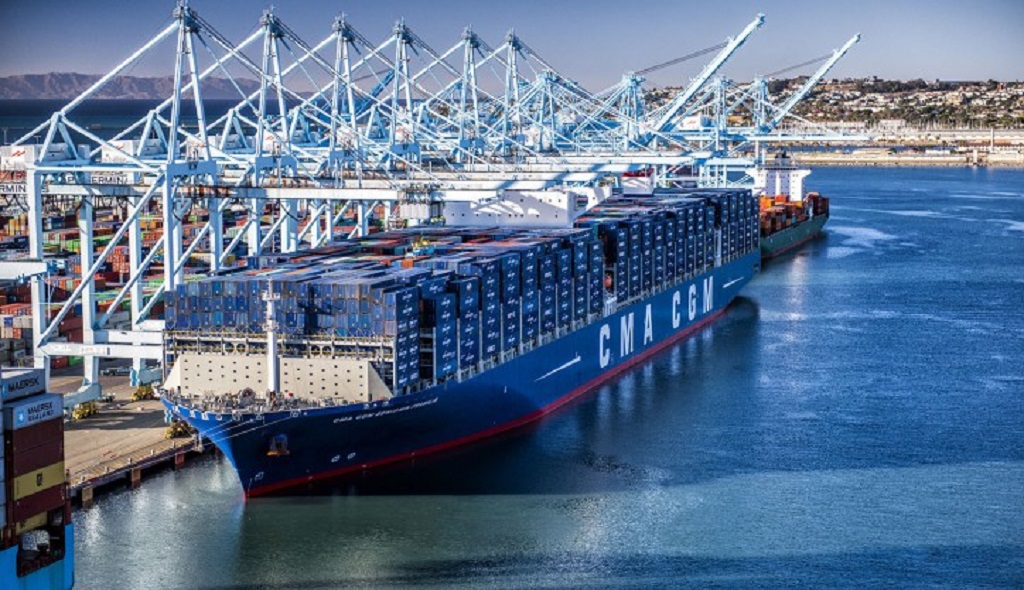 Image: Port of Los Angeles
At 1,300 feet, the Ben Franklin is longer than the Empire State Building is tall, and is wider than a football field.
The vessel is 197 ft. high, which is the same height as a 20-floor building.
After it concludes its maiden call at APM Terminals-Pier 400 at the Port of Los Angeles,
the vessel will later call at the Port of Oakland on December 31. 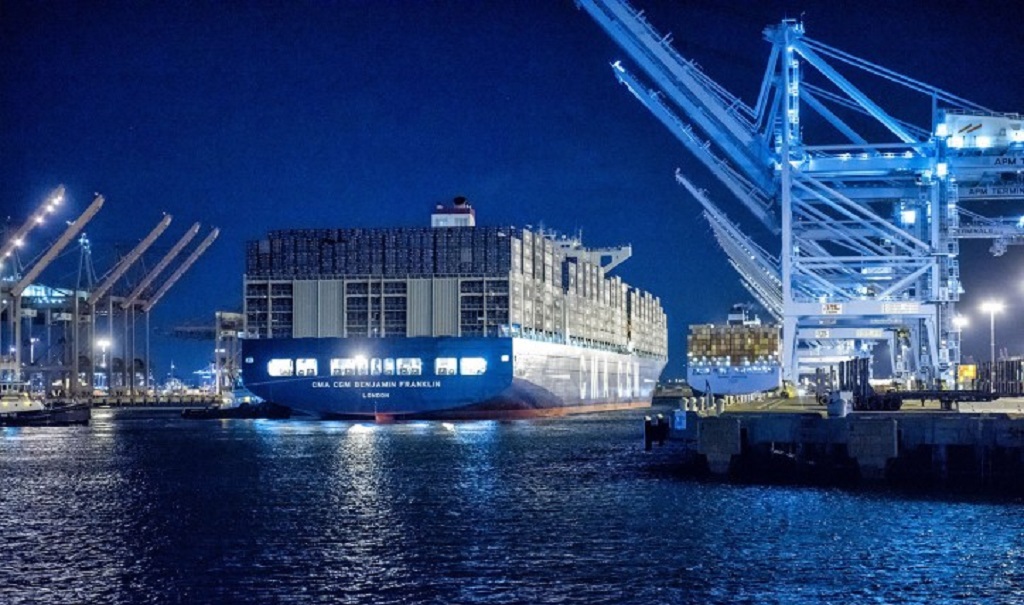 mage: Port of Los Angeles
“By deploying an 18,000-TEU capacity vessel to the U.S., CMA CGM is showing faith in long-term growth potential of the U.S. economy,
and its commitment to increasing its U.S. market share,” said CMA CGM
The ship will be docked at Pier 400 where seven out of a possible 10 cranes will tend to it over the course of five days.

The CMA CGM Benjamin Franklin is deployed on the Pearl River Express, a service connecting the main China ports,
including Xiamen, Nansha and Yantian, with the U.S. West Coast ports. The vessel was delivered to CMA CGM on December 4, 2015. 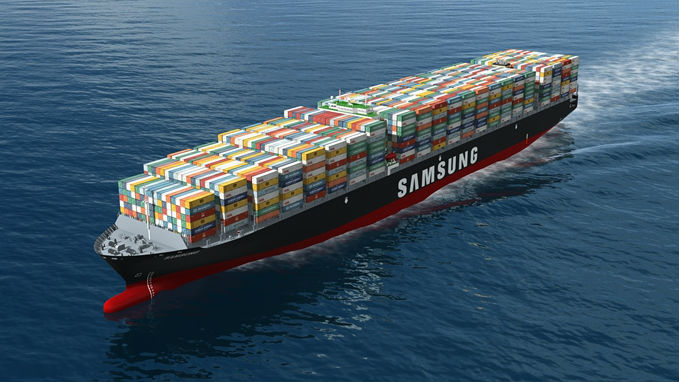