Laten we gewoon maar weer gaan roeien. No problems at all 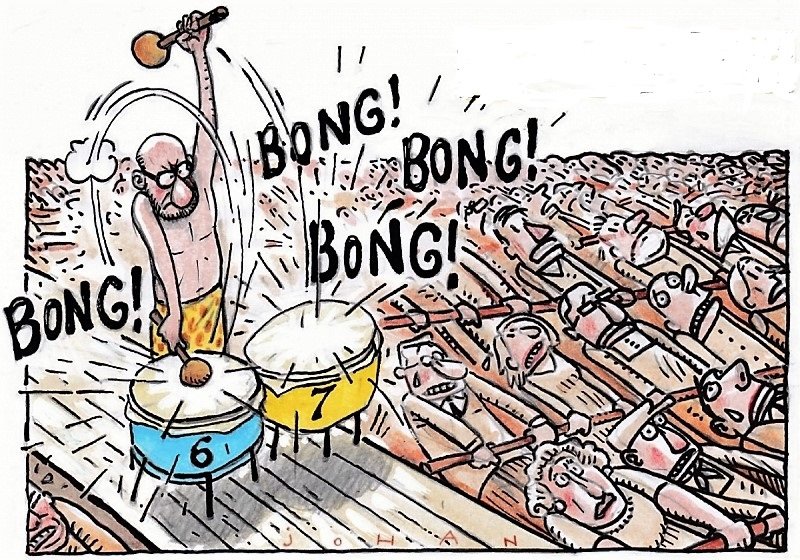 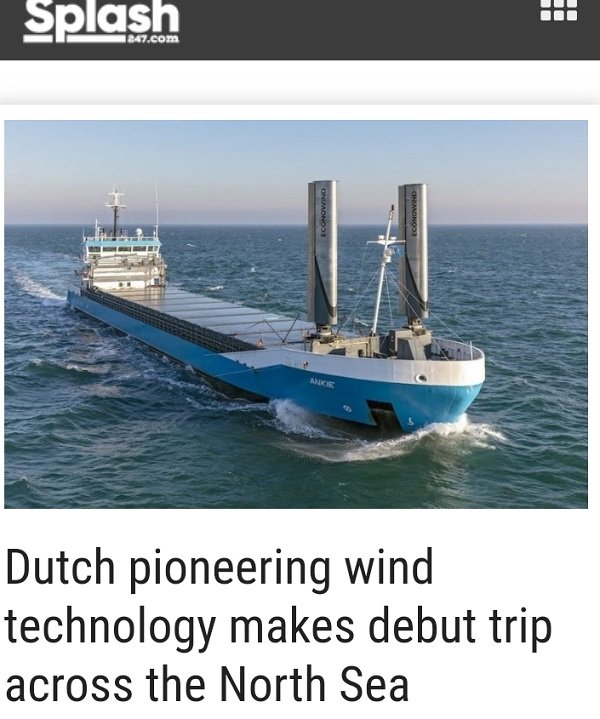 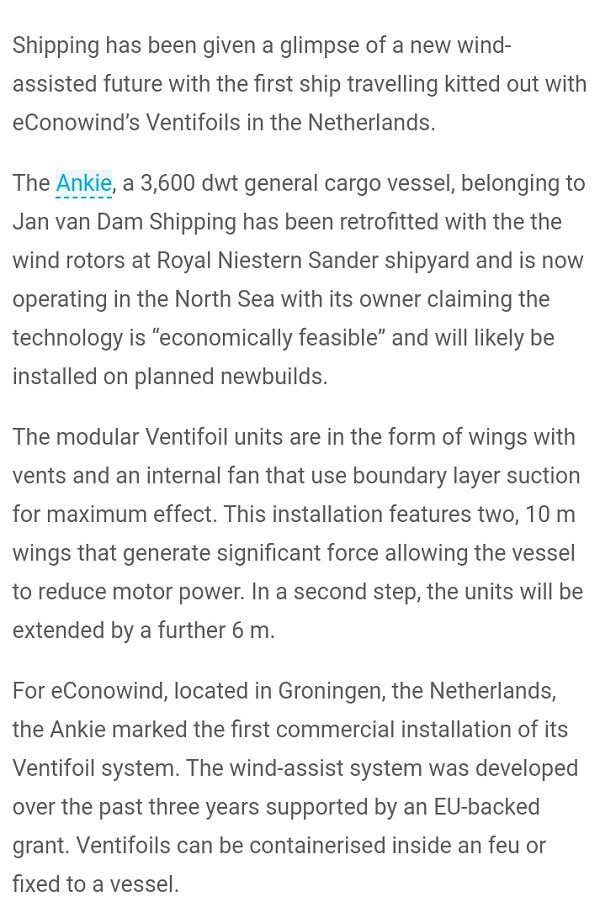 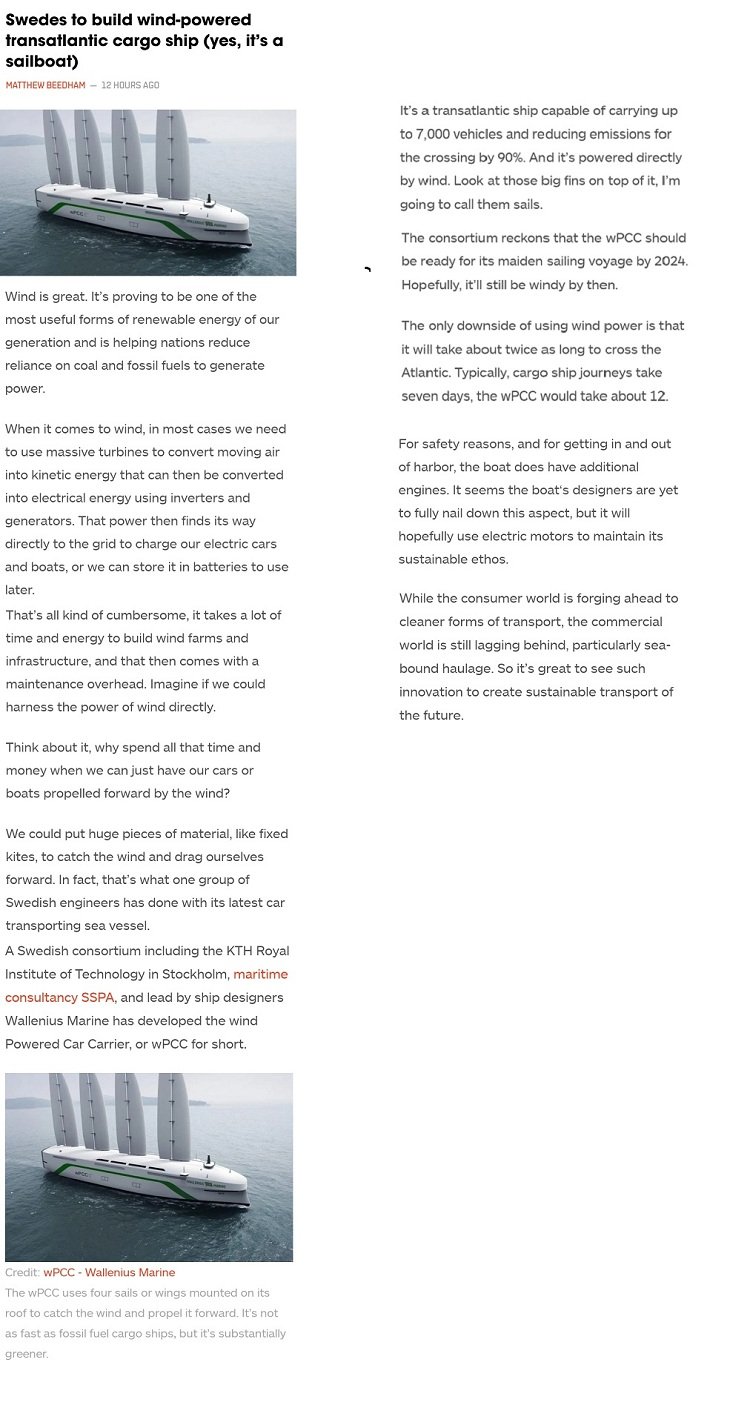 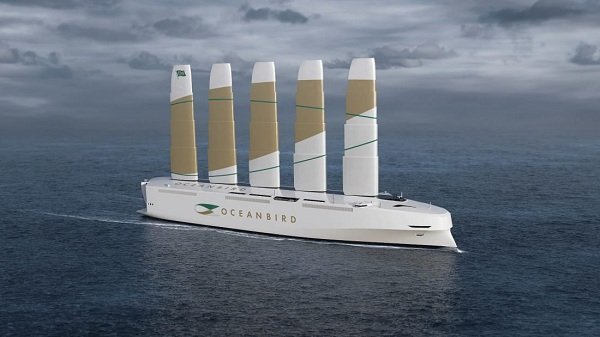 (CNN) — Oceanbird might look like a ship of the future, but it harks back to ancient maritime history -- because it's powered by the wind.
The transatlantic car carrier is being designed by Wallenius Marine, a Swedish shipbuilder, with support from the Swedish government and several research institutions.
Why there is still a chance to make sustainability the way to progress – if we act now
This car brand is changing its business model towards sustainability. Can it be done?
With capacity for 7,000 vehicles, the 650 foot-long vessel is a similar size to conventional car carriers, but it will look radically different. The ship's hull is topped by five telescopic "wing sails," each 260 feet tall. Capable of rotating 360 degrees without touching each other, the sails can be retracted to 195 feet in order to clear bridges or withstand rough weather.
The sails, which will be made of steel and composite materials, need to be this size to generate enough propulsive power for the 35,000-ton ship.
Although "the general principles of solid wing sails is not new," designing the Oceanbird's sails has been a challenge, says Mikael Razola, a naval architect and research project manager for Oceanbird at Wallenius Marine.

The telescopic "wing sails" of Oceanbird will be the tallest ever built. 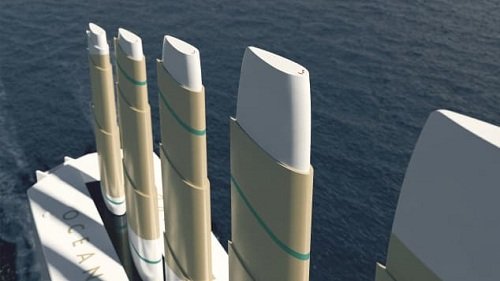 That's because these are the tallest ship sails that have ever been constructed. "This ship, at the top of the mast, will be more than 100 meters (328 feet) above the water surface," says Razola. "When you move up into the sky that much, wind direction and velocity change quite a lot."
To better understand the atmospheric conditions at this height, Wallenius mounted sensors on top of its existing vessels, while they were crossing the Atlantic, and gathered data on wind velocity and veer (a clockwise change in wind direction), up to 650 feet above sea level. "All of this information has helped us design an efficient wing and hull system, that can make the most of the power available in the wind," says Razola.
Cleaning up a dirty industry
Crucial elements in the global automotive trade, oceangoing car carriers are known as RoRo -- the name derives from "roll on, roll off." Rather than loading vehicles with cranes, which would be slow and inefficient, vehicles are rolled along ramps built into the ship.
Large, conventional RoRo use an average of 40 tons of fuel per day, generating 120 tons of CO2 -- equivalent to driving a car 270,000 miles. 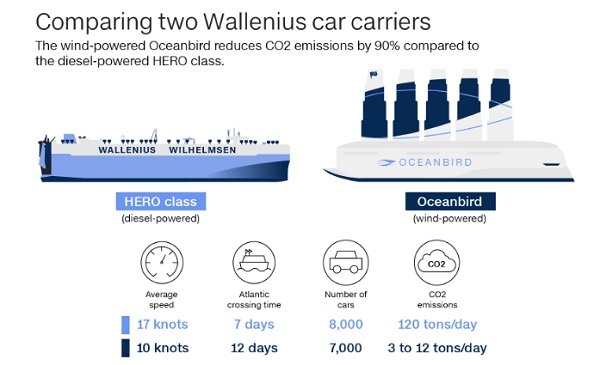 The shipping industry is under pressure to reduce emissions of CO2 and other greenhouse gases. Shipping accounted for 2.89% of global manmade greenhouse gas emissions in 2018, according to the International Maritime Organization (IMO), the UN body that regulates global shipping. In the same year, the IMO introduced a mandatory 50% reduction of total annual greenhouse gas emissions by 2050 — with the ambition to reach zero emissions "as soon as possible in this century."
Oceanbird is designed to exceed these targets -- Wallenius says the ship will emit 90% less CO2 than conventional car carriers. It won't be completely emission-free, however, because it will still rely on engines for manoeuvring in and out of ports and for emergencies.
Slow sailing
With a projected top speed of about 10 knots, Oceanbird will be slower than standard car carriers, which can travel at 17 knots. It will take around 12 days, instead of the standard seven, to cross the Atlantic.
This long journey will require some scheduling changes, says Razola, as well as acceptance from carmakers. "Of course, there will be challenges and we won't be able to do things exactly as we're doing them today, but the response so far from manufacturers has been very positive," he says.

An indoor tank at SSPA, another instituion working on Oceanbird, where a model is being tested with artificial wind and waves. 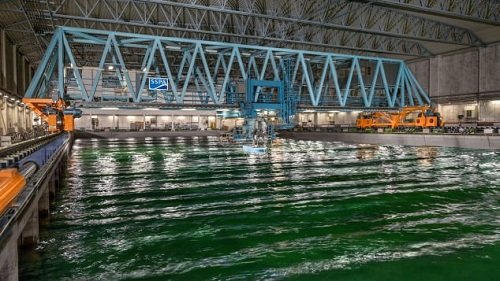 Jakob Kuttenkeuler, a professor at Stockholm's Royal Institute of Technology -- one of the project's collaborators -- is also optimistic. "People are environmentally informed enough now that we think there will be customers willing to put their cars on a ship that goes roughly half as fast as today's ship, if we can make it carbon neutral," he says.
Kuttenkeuler and his team are working with Wallenius on performance and aerodynamics calculations, using weather data to simulate realistic sailing conditions. They have built a 7-meter model of Oceanbird which will sail in Stockholm's archipelago, later this year, to gather data that will help finalize the ship's design.
Razola says it will take around three years, after that, to launch the full-size version. "Our ambition is to see Oceanbird sailing in 2024."
Omhoog